Increase of 11 to 25% on pepper, tomato and zucchini crops in Almeria

Positive agronomic results of the last three 2019 trials on peppers, tomatoes and zucchini at CAJAMAR and TECNOVA experimental farms were presented on July 4th, 2019 at a seminar organized in collaboration with CAJAMAR in Almeria. A hundred agricultural professionals were present. The positive reception received regarding the results presented and the overall success of this seminar confirmed the strong interest of farm professionals in the ALMERIA region towards CASCADE technology.

Pepper trial at CAJAMAR: Crop yield gain of 11% (+ 23% for latest 3 harvests which enjoyed benefits from full exposure to the CASCADE foil)

On November 13th, 2018 a LIGHT CASCADES® doped foil was installed by CAJAMAR experimental farm on a pepper crop (Var. Canzion) in a PARRAL greenhouse of 432 m². An identical greenhouse equipped with a neutral reference foil was used for comparison.

The trial proceeded until end of February 2019 with positive results showing cumulative yield gains of more than 11% (and even + 23% on the last 3 harvests for which the fruits benefited from CASCADE improved light throughout their growth), a number of fruits increased by + 16% (+ 32% over the last 3 harvests) for a similar quality of fruit. 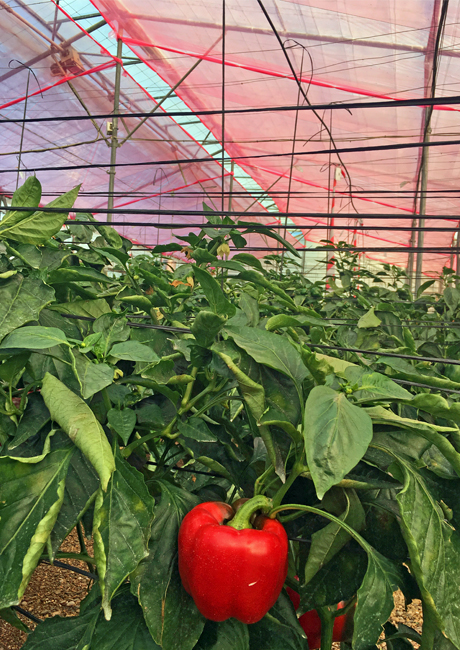 Two trials on tomato and zucchini carried out by the TECNOVA experimental farm in Almeria: Yield gain of 16% on tomato and 25% on zucchini.

During the winter of 2018/2019, TECNOVA carried out two successive trials on zucchini crop (Var. Calabonita) from September 19 until the end of December 2018, then a 5-month tomato trial (Var. Caniles) from December 27, 2018 to May 27, 2019.
Each trial compared agronomic results of crops grown in the greenhouse equipped to a LIGHT CASCADES® doped foil to those using a neutral reference film used as a control.
These two trials have shown positive yield gains of 25% on zucchini and 16% on tomatoes combined with faster fruit development and fruit quality maintained.
Crop yield increases could be partly explained by an increase in the number of fruits per m² of 24% for zucchini and 12% the tomato.